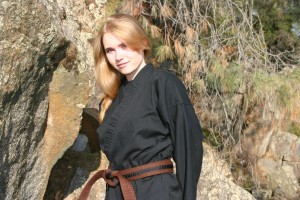 Megan Myers during the six months of black belt training.

Megan began training with WSD in April of 2006.  A dedicated student, she received her black belt in December of 2008.  Megan will be graduation from Sacramento State University with a degree in business in April, 2014, and intends to become a forensic accountant after graduation. She started attending Woodall’s self-defense at the end of her sophomore year of high school and has never looked back.

Ms. Meyers was promoted to the rank of 1st Degree Black Belt on December 7, 2008.