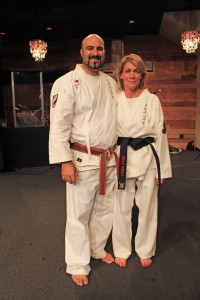 Ms. Hambly at her Black Belt Ceremony; with Conrad Woodall

Ms. Hambly began training at WSD in August of 2008 and received her black belt November 19, 2011.  She lives in Rocklin with her husband and two daughters, both of whom have trained at WSD, and has her own Office and Administrative Support business.  Ms. Hambly is a valuable member of the team, standing in whenever assistance is needed at an event or in the dojo.