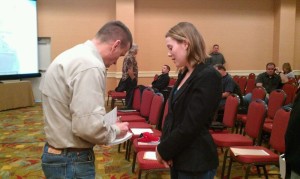 Ms. Caitlin Mooney started WSD in 2004. At the time, she was also involved in numerous high school athletic teams.  After high school Caitlin intensified her training in martial arts and has excelled as both a student and instructor. Caitlin became a black belt under Mr. Woodall in 2010. She also trains and competes in Brazilian Jiu Jitsu under the tutelage of former world champion Cassio Werneck. In addition to being an instructor at the school, Caitlin is an integral part of our seminar and demonstration team. She assists in the instruction of various courses ranging from school bullying to sexual assault and domestic violence prevention. Caitlin is also a member of Peace for Families Sexual Assault Response Team where she responds to local hospitals to provide various services to survivors of sexual assault. Caitlin is currently a student at Sacramento State University where she is pursing a career in Social Services.

Ms. Mooney was promoted to the rank of 1st Degree Black Belt in 2010.