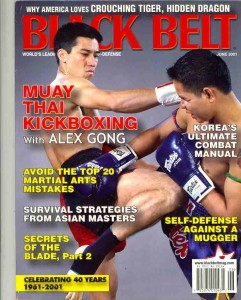 The following accomplishments of Alex Gong as a competitive fighter speak for themselves:

In early August of 2003, Alex Gong was pronounced dead at the scene after confronting a suspected hit and run driver who had slammed into his parked car. Gong chased down the vehicle on foot, catching up to the suspect when the lights changed near Fifth and Harrison streets in San Francisco.

Gong had been working out at the time of the hit and run and was wearing yellow boxing gloves and boxing trunks when he confronted the hit and run driver. A verbal altercation ensued. When Gong put his arm out to stop the driver, the man pushed him back – then shot him point blank.

This is truly a tragic loss and it would be an even greater loss to let lessons of his death be buried in the senselessness of the crime. The cold hard truth is that while Alex was perfectly capable of handling this person in the ring, he wasn’t in the ring.

I became a police officer after I had already earned a black belt with years of traditional training, yet I quickly found out that I had no clue how to deal with a street confrontation. I didn’t understand the street. The psychology of criminals, the dangers of weapons, drug induced psychosis, violent offenders – it was all a world that I was unfamiliar with. While I could do a lot of fancy karate moves I found them often useless because I didn’t know how or when to apply them once I was in an unusual environment that did not have any set of rules. There was no bowing between myself and the criminals I arrested, no formal rules or etiquette; it was survival of the fittest.

All too many times I see in people the confidence that is developed through competitive combat sports such as kick-boxing, boxing, or mixed-martial arts, and that of traditional martial artists, who feel that their training is sufficient to allow them to handle a street confrontation. I also felt this confidence before I actually learned and experienced what the street is all about. Then I realized that it was false confidence that only applied to the rules and etiquette of the sport or martial art I was practicing at the time.

I believe Alex would still be with us today if he had not under estimated the danger of confronting a criminal. I am glad we have people like Alex who are willing to stand up to these people. Put him in a uniform and his actions are comparable to that of every officer who makes the ultimate sacrifice in the line of duty. The unfortunate thing is that Alex made the mistake of not taking him out immediately, and it cost him his life. Once you are in the street there is no championship belt awarded to the winner because there is no winner. There are only those who survive and those who do not.

If an officer witnesses a crime first-hand there is no conversation. The person is either immediately hand cuffed and searched (if it is a minor offense) or held at gunpoint while being taking into custody if the offense is more severe. Had Alex just approached the guy and knocked him out, did a quick pat down search, and held the guy down until the police got there he would be alive and the suspect would be in jail, most likely with a really sore jaw after a hit from Alex.

Unfortunately, this type of street training is not part of kick-boxing, boxing, mixed martial arts, or traditional martial arts and that is why they have serious inadequacies for preparing a person for a real life encounter. We can only speculate, but it is my opinion that with all his skill and talent it was a lesson on how to handle a criminal after the commission of a crime that would have proved the difference for Alex.

Gaining an understanding of the street is more important than actual punching and kicking skills. If you have no education or experience on how things work in real life you may never even get the chance to use your training.